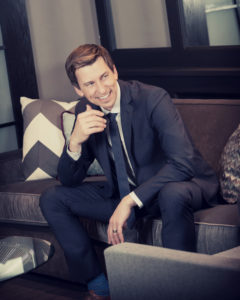 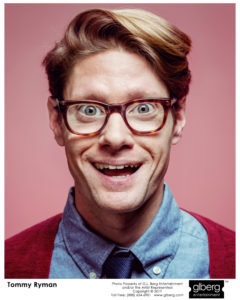 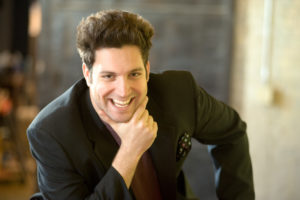 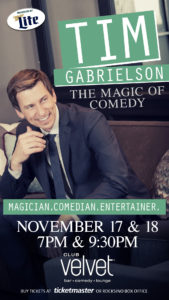 Tim will be appearing in Club Velvet at the Hard Rock Rocksino on Novemeber 17 and 18 at 7pm and 9:30pm.    Get tickets here to join him if you are in the Cleveland, Ohio area.

“A winning entertainment experience is hard to gauge…some say it’s by applause, others by audience interaction. Regardless of the unit of measurement, comic magician, Tim Gabrielson has proven his amazing show is a hit with all audiences. He uses his comedic prowess and mastery of magic to take his audience on a captivating adventure every time he steps on stage.”

This event is presented by Miller Lite 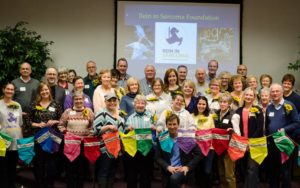 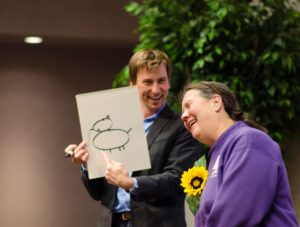 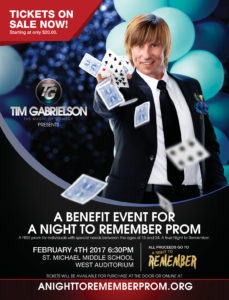 The office is probably not the best place to push the limits unless you work in a very forgiving environment, like the circus. There are levels of protocol that have to be followed for the sake of productivity and standards of conduct. Pulling the chair out from under your CEO at the start of a meeting probably isn’t going to endear you, however hysterical it may be to us, but telling that same CEO a joke during a break just might.

Feel free to insert your own position in the punch line to give it a touch of your personality, but remember to be conscious of with whom you’re talking. The point is to be witty without being offensive.
Here’s another one that cracks me up: A pig and a hen were walking down the country road and saw a sign in a restaurant window: Ham and Eggs $4.99. The hen said to the pig, “you know, we walk by this sign every day and I think to myself, I feed these people day in and day out, I’m so proud.” The pig said to the hen, “for you it may be pride but for me it’s a total commitment.”

Learn how to gauge your audience’s reaction by watching when they laugh. Keeping your antics within range of that will keep you on the right side of the boss. If you recognize that this isn’t one of your strongest suits, limit your shenanigans to break times and coworkers rather than those higher up the salary chain. The general attitude in your office will guide you on what you can and should do, and which offices really enjoy having a good time poking gentle fun at their co-workers.
I recall reading a real life example where after laser eye surgery the patient’s officemate took it upon herself to make large, glaring signs with arrows for everything in the office to help out her buddy. She made signs that read DOOR, KEYHOLE – INSERT KEY HERE, CHAIR, DESK, COMPUTER, KEYBOARD, etc. Though her officemate was in a bit of pain and slightly embarrassed by the big dark glasses he was forced to wear, the mood lightened considerably when he saw the signs all around. In fact, he left several up for months afterwards because they made him chuckle. It was a “feel good moment” that made everyone in the department giggle a bit. This is the emotion you should shoot for when considering whether your prank is appropriate in your particular office. Mean-spirited play doesn’t work around the water cooler and should be avoided at all costs.
Nonetheless, even the stuffiest lawyers’ offices need to let loose every now and then and why not be the one to relax things?

Having a reputation for bringing everyone back to center during stressful times can only benefit your career – as well as your mental health – while on the job. Some companies live in a perpetual state of stress and confusion by their very nature. For instance, my wife works with children diagnosed with emotional and behavioral disorders; which is about as stressful as you can get. As much as she loves her job, it can be pretty tough on her. Many people in those kinds of situations don’t last long in their chosen field because of how difficult it is to endure each day. Laughter can be the foremost preventative element for burnout in these types of careers.

There are some standard rules when it comes to office fun that must be followed from a purely common sense standpoint:
Vulgar or pornographic images have no place in the office, nor do sexual innuendos or jokes.
Avoid gags and activities that make fun of religion, as well. There’s no need to alienate your coworkers or supervisors by accidentally stepping on their religious convictions; these tend to be areas where even those with the best sense of humor fails.
Politics can be fair game if the climate in your office is ripe for it, but know just how far you can push. It’s better to err on the side of caution than to spend the next day cleaning out your desk.

If you harbor ill will toward someone, then do not engage in pranks involving them (your sense of fairness may not be all that surefooted).

Don’t mess with someone’s food; allergies are far too common (as are digestive illnesses like diabetes) to play around here.

The age-old advice of not discussing money, politics, religion or sex in mixed company fares well in this platform. If Kill-joy would faint at the topic, leave it alone. The good news is that his stuffiness is good for something. Leave off the more questionable antics for your college buddies or for off-the-clock hours.